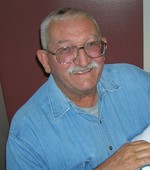 Bruce had many skills. He was a mechanic, a carpenter, and a fabricator. During his lifetime, he enjoyed fixing up classic cars, riding motorcycles, and camping. Moss never grew on Bruce because he was always on the go. There were many times when he would answer the phone and be in a different state. He always liked to tell us how good the weather was wherever he traveled. He was a master story teller and made friends wherever he would go. He leaves behind 3 beautiful granddaughters who he adored, and he proudly showed pictures of them to anyone and everyone.

Bruce was preceded-in-death by his Father Kenneth Oliver Hendrickson, Mother Dorothea Isabelle McNabb, and Brother Thomas Earl Hendrickson. He is survived by his ex-wife Billie Hendrickson of Cedar City, Utah, Brother Doug (Patsy) Hendrickson of Toquerville, Utah, Sister Barbara Hyne of Manitou Springs, Colorado, Son Brian (Leslie) Hendrickson of Washington, Utah, and 3 Grandchildren: Lucy, Katie, and Mattie Hendrickson. He will be missed by many other relatives and friends including Lynn McMahon of Acton, California.

We would like to extend a special thank you to those that helped care for Bruce during these last few months.

A casual Celebration of Life will be held in Bruce’s honor on Saturday, January 12, 2019 from 12-2 pm in the Cultural Hall at 800 South Laurie Lane in Cedar City, Utah. If you have a classic car you would like to bring please do so in his honor.