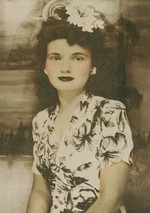 CORRINE Teresa Jones was born August 14th, 1925, in San Francisco, California, to Harold and Margaret Blank. Corrine passed away February 2, 2020 at Stonehenge Care Center with Family at her side. She grew up in the Bay Area of Northen California. While attending a Catholic high school, she won a scholarship for her artistic talent. She continued with her art interests taking classes throughout her life despite being very busy with family. She married Edwin Francis Jones (deceased) in 1943. They raised five children, Margaret (Dean) Ehn, Michael (deceased), Maureen Hackwell (Chuck Bryant), Patrick (Dawn), and Clarence, plus many grandchildren and great-grandchildren. Corrine’s younger brother, Harry, preceded her in death. She is survived by a younger sister, Elaine Bettcher, Castro Valley, California. Corrine was a much loved food manager and chef of a state run rehabilitation house in Cedar City in her later years. Our Mother will remain fondly in our hearts, a loving Mother and Grandmother.