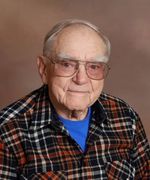 David Briggs Price passed away early Wednesday morning February 19, 2020 at the age of 92 at the Cedar Medical and Rehabilitation Center in Cedar City, Utah. David was born on April 23, 1927 in Melrose, Massachusetts to John and Emma Price. He spent his early years in Massachusetts. David joined the United States Navy at 16 years old by forging his mother’s signature on his enlistment papers. His mother found out and had him returned home. He re-enlisted when he turned 17. He served on a submarine crew and later on the aircraft carrier USS Midway. In 2015, he went to Washington D.C. with the Iron County Honor Flight.

David was an insurance and investment salesman most of his working years. He was married to Dorothy and they had two boys, John and Wes. After Dorothy’s death, Dave moved to California and there met Betty. They were married and moved back to the east coast. After Betty’s death, David moved to Cedar City, Utah in 1999. David was a faithful member of Community Presbyterian Church and served as a ruling elder. He had many dear friends at the church.

A celebration of David’s life will be held on Sunday March 1 at 1:30 p.m. at Community Presbyterian Church, 2279 N Wedgewood Ln, Cedar City.