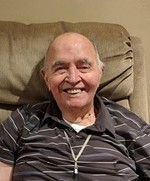 Gervase Grant Bell passed away on September 6th 2019, In the home of his daughter, surrounded by loved ones. Gervase was born on July 20, 1933 in Brisbane, Australia. He was the sixth child born to Charles Wilfred Cecil Bell and Mabel Pearl Rixon . Gerv’s family worked hard to make a living during the Depression. In August of 1951, Gerv immigrated to the United States. He lived with his sister and her family in Moore, Idaho. Soon after his arrival, he met Elizabeth Freckleton. They dated for two years and loved to go dancing and to the movies together. On July 15,1954, Gerv and Beth were married in the Idaho Falls Temple. They welcomed 5 children, 3 sons and 2 daughters into the family in the 23 years that they lived in the Lost River valley. In the Spring of 1967, the family moved to Boise where a sixth child, a daughter was later born. They started their own business In the spring of 1974, Bell Sprinkler Company. Over the years Gerv and Beth have been active in the Church of Jesus Christ of Latter-day Saints, and have raised their children in the gospel. They served as full time missionaries in the Kentucky Louisville mission between 2001-2003 and helped many people and made dear friends. In July of 2004 they celebrated their 50th wedding anniversary, and took a trip to Australia. They were able to celebrate their 60th Wedding Anniversary together Before Beth passed away on April 25 ,2015 due to complications from a previous surgery. The first year after Beth’s passing, Gerv took turns living with some of his children. From 2016- 2019 he lived with his youngest daughter and her young family In Utah. On the morning of September 6th, 2019 he passed away peacefully,due to a heart attack suffered the previous week. He was 86. Gerv was a quiet man, but full of love, kindness, and gratitude. He taught his posterity to Love the Savior, one another and their fellow man. He was a hard worker, and left a legacy of Honesty and Integrity. He was preceded in death by his parents, all siblings, his infant son: Stanley Lynn, his loving companion: Elizabeth Freckleton Bell, Grandson: Benjamin Ross Green, and Great- Grandsons: Allen James Oney, and Owen Bruce Bell. He is Survived by his children: Grant(Janelle), Adell Roundy( Rex), Chad(Reba), Deborah Green(Brian), Heather Harris(David). On the day of his death, he had 24 Grand-children and 46 Great-Grandchildren. Services For Gervase will be held on Saturday, September 21st at 1pm at the LDS chapel located at 4921 N. Mitchell St. Boise, Idaho.