To share your memory on the wall of James Kofford, sign in using one of the following options:

On April 3rd, 1955, James married Sylvia F. Ehlers. Together they raised two children, Kristine and David. James worked in civil service until his retirement in 1980. He enjoyed many years of traveling, attending church, and square dancing with his wife of over 59 years. James had a wonderful sense of humor and was passionate about singing. His jokes and voice were admired by many.

James was preceded in death by his father Carl, his mother Eunice, his wife Sylvia, his brother Glen, and his daughter Kristine. He is survived by his son David, his sisters Joanne, Donna, and Sharron, his grandchildren Staci, Jodi, Heather, and DJ, and great grandchildren Makaya, Malakai, Micah, Jonah, Corah and Kennadi.

A memorial service will be held on Saturday, May 4th, 2019 at Valley Bible Church in Enoch, UT at 3:00pm lite refreshments will be served following the service.
Read Less

To send flowers to the family or plant a tree in memory of James Kofford, please visit our Heartfelt Sympathies Store.

Receive notifications about information and event scheduling for James 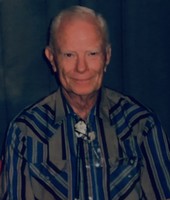