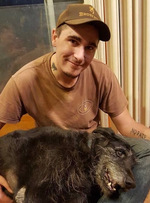 Joseph Thomas Weber left this world all too soon on Sunday December 27th, 2020. He was born in Templeton, California to Stanley and Penny Weber on April 5th, 1988.
Joe spent his formative years in Paso Robles, California and graduated from Liberty High School in 2007. From an early age, Joe had a natural talent and mechanical ability. As a young man he worked at Jiffy Lube, where he learned more about auto mechanics and developed interests in engineering. In 2012 Joe made a powerful and positive choice when he embraced a life of sobriety which he maintained until his death. Hemet Emily Adams, and she became the love of his life. Joe and Emily were married in 2016 before moving to southern Utah where he worked for Calaway Heating and Air Conditioning. They welcomed their son Lyle in July 2018 and daughter Aubrey in September 2020.
Joe was proceeded in death by his mother Penny Gayle Weber. He is survived by his father Stanley Weber, sisters Angela Walker and Sarah With, his beloved wife Emily Weber, son Lyle William Weber (2 ½), and daughter Aubrey Penny Weber (3 months).