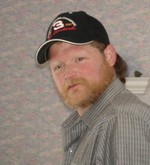 Justin Dallas Anderson passed away July 4th, 2020 in Cedar City Utah. Justin was born
on a cold Friday morning March 12th, 1971 his entry into this world left him with a lifetime filled
with determination, admiration, and love. Justin arrived into this world with bright red penny
colored hair and loving intense eyes, along with the pleasure that every newborn brings.
As a very young toddler he accompanied his dad in the most unsuspecting locations,
together they explored the world. Justin and his dad shared their love of automobiles and
anything associated with their operating systems. Justin began elementary school at North
Elementary where he was among the group of students who later carried their assigned chair
and was transferred by bus to East Elementary to continue his education. From there
culminating with his graduation at Cedar High School in 1989 as a Cedar High Redman.
His passions were his children, cars (preferably vintage) and learning the trade to
maintain and repair vehicles and industrial machine maintenance. He enjoyed the challenges of
doing his job with pride if there was work to be done, regardless of circumstances, he was
happy to be involved. He relished the value and satisfaction of helping the people around him.
Justin could also be found in the hills of Cedar City shooting or watching NASCAR.
Justin is survived by his children; son Cody Warren, daughters Rusty Anderson, Jaidey
Anderson, and Julie Copeland. He is also survived by his mother and brother. He was preceded
in death by his father and both sets of grandparents. He will surely be missed by his family and
friends.
Due to the pandemic there will be no public celebration of his life.