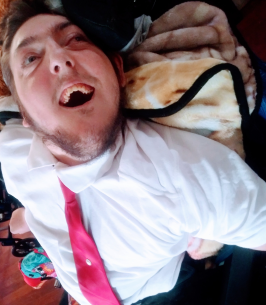 Nathan Kent Decker, age 25, passed away peacefully on August 24, 2021, in Cedar City, Utah after a courageous lifelong battle with cerebral palsy. Nate was born on August 15, 1996, in Cedar City, Utah, to Kent and Heidi Decker.
Nate had a very adventurous life. When he was 6 years old we moved to Safford, AZ, where he met his first girlfriend, Courtney. They loved to watch TV together and hang out. While living there he had a friend named Stinky Jim, who loved to fart around with Nate and go Geocaching.
When Nate was 13, we moved to Mountain View, Hawaii. He loved to go to the beach. He also really enjoyed Stake Dances at the LDS Church. He danced with EVERY girl and sometimes all the girls in a conga line while the other boys stood as wall flowers and were jealous. One of his favorite girls was Kealoha. They were in an early morning seminary class. She was always late and every time she’d walk in, he’d start laughing and the seminary teacher would say, “Now this is what it’s like when you feel the Spirit.” Everyone else knew the real reason he was laughing. Nate had a young men’s leader who he had a special connection with named Karl Halemano. Karl would always take care of him at young men’s activities. He always made sure to make time for Nate and make him feel included.
When Nate was 15, we moved back to Cedar City, Utah. He attended Cedar High School for his sophomore, junior, and senior years.
After high school, Nate attended TURN Community Services. He enjoyed attending the Day Program on 200 East and hanging out with his friends. When COVID started, Nate started “working” from home and was the boss of his mom. They had singing time every morning where they would listen to The Tabernacle Choir at Temple Square sing Primary songs. He loved watching his TV. He watched all existing episodes of Power Rangers four times, every season of The Amazing Race three times, and ALL seasons of Survivor and was on season 20, episode 12. He had friends who were staff from TURN Community Services come hang out with him every day except for Sunday. Their names were Jenna, Manny, Erika, Isaac, Megan, Bryn, and Kailie. They came over to watch his shows with him, go bowling with Nate’s yard bowling set, make comics with silly stories, and draw on his easel.
Nate is survived by his dad, Kent, mom, Heidi, his favorite brother, Edwin, Grandma Diane, Grandma Della, great grandma Hoff, and many aunts, uncles, and cousins. Nate is preceded in death by Grandpa Dale, Grandpa Herbst, Grandma Jewel, Grandpa Meade, Uncle Jeff, and Aunt Janet.
Funeral services will be held Saturday, August 28, 2021, at 10:00 a.m. at the 15th Ward LDS Chapel located at 400 N. 500 W. in Cedar City, Utah. A viewing will be held prior to his Celebration of Life from 9:00-9:45am. Interment will be at the Cedar City Cemetery under the direction of Affordable Funeral Services.
Online condolences can be sent his memorial page at www.affordablefuneralservices.com.