To share your memory on the wall of Robert Owen, sign in using one of the following options:

Print
Robert “Bob” L. Owen, age 83, passed away from this earthly life on June 28th, 2020 at his home in Cedar City, Utah. He was born in Muleshoe, Texas on April 18th, 1937 to Earl and Mae Sullivan Owen. He was the oldest of three children.

He spent his childhood and teenage years working as a hired hand at local Muleshoe farms and ranches. He was always a hard worker and loved to work. He took pride in his work and was a jack-of-all-trades. He stayed busy working in his yard until recently when his health declined.
Bob worked many years as an over-the-road truck driver for several companies. He most recently spent 20 years working for Cedar City Corporation as the garbage man, in which he was very well known around town. Many kids would wait outside for the garbage truck to come as Bob was always so fun to visit with.
Bob had two previous marriages in which three children were born. He then met and married Jimmalie Ann (Stewart) on June 28th, 1986. They were married 34 years on the day of his passing.

After his retirement Bob enjoyed tending to his garden, working in the yard, fixing old tractors, and staying busy.
Bob loved time spent with his grandchildren and great-grandchildren. Going to breakfast with his friends every morning, riding his four-wheeler with his dog Maggie, and hanging out in his man cave that he was so proud of.
Bob is survived by his loving wife Jimmalie; his children Donny and Danny of Texas; his sister Marcha Rasco of Texas; his step-daughter Debbie Morris of Utah and step-sons Ron Davis, Jr of California and Matt Davis of Arizona; twelve grandchildren and bonus granddaughter Amanda; many great-grandchildren as well as many cousins. He was preceded in death by his parents, his brother Fred, and his son Joe Bob.
Our family would like to thank the great nurses at Intermountain Homecare and Hospice who so lovingly cared for Bob in his last months.
At Bob’s request there will not be a service.
Thanks for the many laughs, memories, and stories over the years. Love you always and miss you tons.
Read Less

There are no events scheduled. You can still show your support by sending flowers directly to the family, or planting a memorial tree in memory of Robert L Owen.
Plant a Tree

Plant a Tree in Memory of Robert
Plant a tree 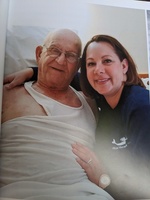