To share your memory on the wall of Robert Taylor, sign in using one of the following options:

Print
To watch the service on Zoom link please Click on Photos and Videos button and scroll down a little.

Robert Elvon Taylor (Bob), age 79, passed away peacefully, surrounded by family on February 8, 2021 in St. George, Utah. Bob fought a c... Read More
To watch the service on Zoom link please Click on Photos and Videos button and scroll down a little.

Robert Elvon Taylor (Bob), age 79, passed away peacefully, surrounded by family on February 8, 2021 in St. George, Utah. Bob fought a courageous battle with complications caused by COVID-19 coronavirus and found much comfort in being able to spend treasured moments with each of his children and his loving wife, Penny prior to his passing.

Bob resided in Parowan, UT for nearly 30 years and loved being up on the “Taylor Mountain” with his family and horses. Funeral Services will be held Saturday, February 13, at 11:00 a.m. at the LDS Church building located at 90 S. Main Street in Parowan, Utah. A viewing, for family will be held just prior to that at 9:30 a.m. The interment will be immediately following the service at the Parowan Cemetery. Family and friends can also view the services via the internet at: https://us02web.zoom.us/j/81485261324

Bob was born in Provo, UT, to Leo Von and Ronella (née Olsen) Taylor, wonderful parents, on November 22, 1941, his grandmother Stella (née Dean) Taylor’s birthday. Bob is survived by his beloved wife Penny (née) Smith Taylor, his 8 children, Robert, Ronald, Rodrick, Richard, Ryan, Russell, Randon and Rebecca (née Taylor) Johnson. Nothing made Bob more proud than being blessed with an eternal family and his grandchildren were his pride and joy. Bob is also survived by 54 grandchildren and 6 great grandchildren.

Dad grew up, in post-WWII Springville and Provo, UT, where he attended elementary and middle school. In his early youth, the family moved again, for a short period, to Springdale, UT, before moving to Henderson, NV, in 1957, where he attended high school, graduating from Basic High School in 1960. Dad then served a full-time mission for the Church of Jesus Christ of Latter-Day Saints in the Western States Mission from 1961 to 1963. Returning home from his mission, he settled in Henderson, NV, attending UNLV, and joined the fire department in 1964. At about this time, he met and married the love of his life, Penny (née Smith) Taylor. They were sealed in the St. George LDS Temple on January 31, 1965.

In 1972, Bob was accepted into UCLA dental school, left the fire department, and moved into married student housing in Westwood, CA, where the small family lived for the next four years until he graduated in the summer of 1975. Dad had a nearly photographic mind and learning seemed to come almost naturally to him. This gift combined with his hard work, allowed Dad to graduate from dental school in nearly half the time it took typical students, even though he and Penny were also shouldering the responsibilities of having 5 small children when he graduated. After graduating from UCLA, Dad moved his growing family back to Henderson, NV to establish his dental practice.

Bob and Penny would have three more children while in Henderson. Bob spent many hours watching his boys play sports for Basic High School, served in many church callings, was a longtime Boy Scout leader, and enjoyed trips to Lake Mead while raising his family. Dad often said that his only daughter Becky “never caused him a moment’s trouble,” and all of the Taylor boys knew that Becky was Dad’s prize for putting up with having 7 sons.

Dad’s dental business was located at the corner of Atlantic St. and Lake Mead Dr. in Henderson, where he worked until selling it to his son, Ron, in 2001, and devoting more of his time and attention to his ranch in Parowan, UT, where he raised horses. Dad loved horses and serving in the Church, with his wife of 56 years. After serving a brief service mission at Moapa, NV, mom and dad were blessed to serve at the Nauvoo, Illinois Visitors’ Center and Mission, from 2016 to 2018, where they both appeared in daily performances, gave tours at the many historical sites, and Dad had the special experience of being a draft horse and ox teamster. Dad especially loved each morning’s chores as he got to feed and clean each of his teams and work very closely with his beloved horses. This was a fitting sunset on Dad’s life, as he never strayed far from close activity with his horses, enjoying many rides into the sunset with both family and friends saddled up at his side. He was loved by all who knew him and although he will be greatly missed, loved ones find comfort in knowing that Dad’s testimony of the Gospel of Jesus Christ is at the very center of the great family legacy he has left behind.
Read Less

To send flowers to the family or plant a tree in memory of Robert Elvon Taylor, please visit our Heartfelt Sympathies Store.

Charlie Bunker, Heidi, Josie, Charlie, Clay, LeeAnn Johnson, and other have sent flowers to the family of Robert Elvon Taylor.
Show you care by sending flowers

Posted Feb 16, 2021 at 04:11pm
I only met Bob one time but it was a blessed and precious time: the wedding of his granddaughter to my grandson! The time of fellowship was short but my memories are dear! Boston & Jacob we’re blessed to have had an amazing grandfather in their lives! My thoughts are with you!!! Grandma Becky (the Georgia southern grandma!)
Comment Share
Share via:
LN

Posted Feb 16, 2021 at 01:49am
Dear Penny, the rest of the boys and their families and Becky. I am just reading Bob's obituary and feel sad and grateful to have known him and most all of you. I loved visiting your family when you first moved to Cane Springs. Many good visits and always loved seeing Bob and Penny together. God bless, Lowell Nelson
Comment Share
Share via:
GO

Posted Feb 15, 2021 at 08:35pm
Penny,
We were saddened to hear of Bob's illness and death. It was a wonderful time for us to serve with you both in Nauvoo. It was good to read of your wonderful family in his obituary. They will be a great help as you adjust to your loss. Know that you are in our prayers, and my the peace of the gospel help you all at this time.
Love,
Gil and Carol Orme
Comment Share
Share via:
RD

Posted Feb 14, 2021 at 07:08pm
We will remember Robert while serving our short mission at Warm Spring, Nevada. So sorry to hear of his passing but glad to know that he has taken another step in our Heavenly Fathers plan and that him and his sweet wife have n
Been on the right path in this life.
Comment Share
Share via:
BH

Posted Feb 13, 2021 at 08:05pm
Sister Penny we were sad to hear of the passing of Bob. Sorry we weren’t able to attend his funeral however we did join you on the Zoom link. The children paid a great tribute to their father. So glad for the gospel of Jesus Christ. We send our love and prayers for you and your family. We were very privileged to serve with you both in Nauvoo. Love Bruce and Sharon Hall
Comment Share
Share via: 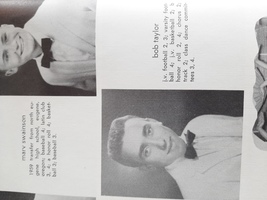