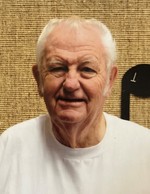 Ross Orvill Hickman passed away on October 5, 2020 in Cedar City, Utah. Last year at his 87thth birthday celebration, he said he was not going to make it to his 88thth birthday. He said it jokingly, but his words proved to be accurate. A few hours shy of his 88thth birthday, he passed away while playing a game with his beloved wife of 66 years, Berniece.
Ross was born in Downey, Idaho in 1932. His family later moved to California where he graduated from Turlock High School in 1952. After high school, Ross joined the United States Air Force. During his military service, he married Berniece. Although Ross was always fascinated with cars and machinery, it was in his 4 years of military service where he learned the trade of being a machinist.
After his military service, Ross worked as a machinist and spent 48 years working at HyPower Hydraulics. His blue collar work ethic, gruffness, and his uncanny ability to fix just about anything, built a mutual respect among his co-workers. Ross loved hunting, fishing, camping, and RVing. As a person that loved cars and mechanical things, he naturally enjoyed driving and riding around in a side-by-side and/or four wheelers. He really enjoyed these outdoor activities, but the meaningful part was doing them with family and friends.
He is survived by his wife Berniece, 3 beloved children (Beverly Buckner, Rick Hickman, and Cathleen Clawson Lemings), 11 grandchildren, 23 great-grandchildren, and a year’s supply of Mountain Dew.
Memorial Services will be held at 11 AM on October 17, 2020 at The Church of Jesus Christ of Latter-Day Saints building located at 370 North 4050 West Cedar City, Utah 84720. A Celebration of Life will be in California at a later date.