To share your memory on the wall of Starr Murie, sign in using one of the following options:

Starr had a great love of animals, and could never stand to see any animal being abused or in pain. There were always animals in their home, many pets with problems that kept them from being adopted by others.

Starr is survived by her husband Kevin Murie, and extended family. Also by her daughters, Amber (Paul) of Simi Valley, CA and Angel Snyder of Victoria Canada.

Receive notifications about information and event scheduling for Starr

There are no events scheduled. You can still show your support by sending flowers directly to the family, or planting a memorial tree in memory of Starr Joanne Murie.
Plant a Tree

We encourage you to share your most beloved memories of Starr here, so that the family and other loved ones can always see it. You can upload cherished photographs, or share your favorite stories, and can even comment on those shared by others.

Posted Jul 19, 2020 at 12:49pm
Kevin so sorry to her about Starr's passing. She was a special person as you know. I'm glad I was able to meet her and get to know her a little bit. You were lucky to have such a devoted mate all this years. Your love for each other will never end. With Sympathy Gary and Deb
Comment Share
Share via:
PL

Posted Jul 08, 2020 at 11:41pm
Starr was a great friend of mine, she was always there for me. We talked almost everyday and sometimes for hours. Starr always talked about writing a book about her life and adding some of my stories in there, but we both decided it would be to X rated to publish. She loved her animals, they will miss her. Well, my friend rest in peace, drop by and visit with me.
Penny LeFevre
Comment Share
Share via: 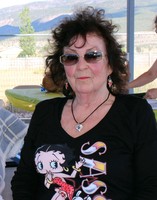