To share your memory on the wall of Johnny Rollins, sign in using one of the following options:

Provide comfort for the family of Johnny Rollins with a meaningful gesture of sympathy.

To send flowers to the family or plant a tree in memory of Johnny Dale Rollins, please visit our Heartfelt Sympathies Store.

Receive notifications about information and event scheduling for Johnny

We encourage you to share your most beloved memories of Johnny here, so that the family and other loved ones can always see it. You can upload cherished photographs, or share your favorite stories, and can even comment on those shared by others.

Posted Feb 01, 2020 at 12:54am
Rest in peace my dear nephew. I'll never forget you and Bill coming to wake me up so I could get ready for work. You will be missed. Love Aunt Alice.
Comment Share
Share via:
X

Posted Jan 30, 2020 at 12:31am
I miss Johnny knocking on our door looking to talk to my husband about everything under the sun. He is such a genuine sweet hearted man. Rest easy now with your sweetheart 😘
Comment Share
Share via: 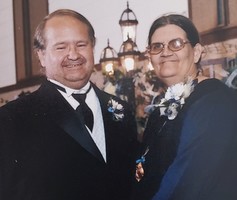